Warwick Fyfe is enjoying well-deserved  success for his appearances as Klingsor in the Opera Australia concert performances of Wagner’s Parsifal at the Sydney Opera House with Jonas Kaufmann. This coupled with the universal acclaim he received for his interpretation of Alberich in the recent OA Ring bodes well for the future. So what’s next?

A selection of reviews noted below are testament to the quality of his voice and artistry. 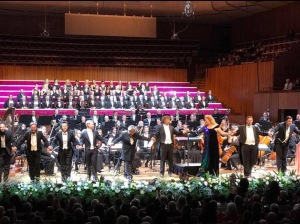 “Australian baritone Warwick Fyfe turned in a malevolent, baleful and superbly sung Klingsor, the perfect doubleton to his award-winning Alberich. Whopping out the decibels, and with some penetratingly inflected text work…” Clive Paget, Limelight Magazine, 10/08/2017

“Warwick Fyfe as the evil sorcerer Klingsor was simply sensational. He thundered the text, expressing the seething rage underlying Klingsor’s malevolence. His articulation of Wagner’s text was exemplary. Having recently excelled as Alberich in Opera Australia’s Ring Cycle, Fyfe has shown himself to be one of the finest Wagnerian singers Australia has produced.” Deen Hamaker, Soundslike Sydney , 9/08/2017

“As the magician Klingsor, who was expelled by the Grail knights for his impure desires and established himself in the valley outside Montsalvat, Warwick Fyfe brought his unique combination of vocal and performance style to his villainous character (with Vincent Price coming to mind) in a magnificent display. With powerfully heated stentorian might, as if delivered from a smelter within, the energy that Fyfe delivered came skilfully forged and phrased, adding further weight to the heights he can reach after his excellent Alberich in Opera Australia’s Ring.” Operachaser, 11/08/2017